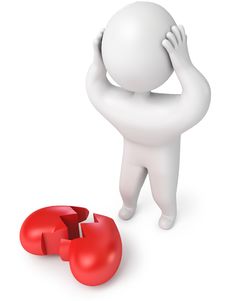 So much healing occurs when we tell our stories, and so much pain stays trapped inside when we keep silent. Hence why I wanted to sing it out in the cry of a broken hearted pastor. The problem with telling stories of emotional pain from a series of events, is that they never seem to sound significant to others. Its like describing a paper cut to someone - who cares? But lots of paper cuts together cause great pain, whilst being hard to communicate to others. Consequently, we keep it all to ourselves, and don’t find healing. So to help myself heal by telling my story, and to help others have the courage to share their stories— here’s my story of debilitating paper cuts that overlapped with each other over a period of a few months. But as I’ve found, thankfully, God also gives us healing balm for the wounds (which will come in part 2).

Paper cut 1: My Father died, and I wasn’t told or invited to the funeral. Suddenly many dreams of having a better relationship with my dad were shattered. I didn’t get many condolence cards for a while, but a friend sent me a letter of correction, telling me I’m seemed depressed (from paper cut 2). Another friend said he didn’t see how it would be a big deal to me because I didn’t grow up with my dad. No one offered to preach in my place that week, so all this made me feel like I wasn’t expected to mourn. I preached that Sunday, and I mourned alone, half-embarrassed that I was mourning.

Paper cut 2: An abuser died, and after seeing them praised online, I found myself finally mourning all the childhood abuse I’d experienced. I got counselling, and discovered I’d had PTSD my whole life. The counselling stopped my PTSD symptoms, but I still now had to mourn the abuse. Some days were tough days, some were ok. I decided to be open and share my abuse story with a small number of people, and ask people to pray for me in the tough days. Pray requests were ignored, and instead of responding to my texts for prayer, people gossiped about me. Some of the things my wife and I had shared, about our difficulties over the months, got passed around like Chinese whispers (aka ‘whisper down the lane’ or 'the Telephone game' in the USA - which is the term I'll use from hear on, because I think we should stop saying 'Chinese whispers'), and the versions that eventually came back to us were untrue and very upsetting. People spoke to us with such a lack of love, so much criticism, self-righteousness, and dishonesty that we felt thoroughly beaten up. I’d tried to step out in vulnerability by sharing my story to people I trusted, but that sacred space was violated, and my trust crushed.

Paper cut 3: My Ehlers Danlos Syndrome symptoms had got really bad, I was in constant pain, bedridden, and suddenly a wheelchair user that needed help to get to the bathroom. My wife was heavily pregnant, and we weren’t being offered much help by people (but we’re thankful for those who did). Of course, this would have been easier to bear if it wasn’t for all the other paper cuts.

Paper cut 4: Our church asked me to pass on a polite complaint to an affiliation we belonged to. In response a senior leader engaged in an email conversation with one of the ‘paper cut 2 gang’ detailing a list of faults he perceived I had. This email got exaggerated and used against me. When I asked if we could see the email to get some clarity, I was told that it had been deleted by a virus. I gently approached this senior leader, hoping he’d understand he’d made a mistake, but instead he defended his decision, and showed no interested in dispelling the slander that had arisen. Our church never received a proper response to our complaint.

Paper cut 5: When my wife and I tried to reason with these people, we were gaslit. Gaslighting is when you do something bad, but try to persuade others that it’s their fault, or that they've misunderstood. We were told that we solely were the problem. My wife was told, behind my back, that I was the problem. And I was told, behind her back, that she was the problem. People blame shifted onto the senior leader and local friends - but only behind their backs. We were told that our desire to move to a bungalow (a home without stairs for my wheelchair) was a sign of us wanting to isolate! My poor wife was so confused. We were so hurt. I’d gone from finally having no PTSD symptoms to then being told by critics that I had mental health problems. I was so confused. I thought I had a clean bill of mental health. I’d had loads of counselling, and I'd chosen to continue counselling (yet ironically one of the complaints about me was that I wasn’t having counselling anymore!). I subsequently had to talk to a psychiatrist to check I wasn’t losing my mind or in denial.

Paper cut 6: Suspicion, slander and false accusations grew. I had some harsh things said to me in raised voices whilst I was sitting in pain with a dislocated rib/knee/wrist. Some accusations had elements of truth in them, some were ridiculous. A caricature had been created from so many people playing the telephone game without asking us questions. People from other churches told me they’d heard stuff, and subsequently, partnerships I explored for our church weren’t possible. Friendships were lost, at a time when I needed friends to say, ‘Can I take you out for a walk in your wheelchair? Can I help your wife?’
I didn’t tell our church though, because I thought it would be better to keep silent, and avoid gossip. I wanted to give people a chance to repent— I was sure they would, so why drag their names through the mud? I waited, and waited. I cried every day for about a year. For a few years since, I’ve probably cried once a week over this. My wife says it’s now hard to know who’s safe to be open with about everyday struggles, without fear of info being twisted and used against her.

Paper cut 7: Our beautiful baby was born. And within minutes of her entering this world, I was crying over all these paper cuts. I tried so hard not to, but my heart had been pummelled. On top of this, people who I expected would say congratulations, were silent. I felt robbed of the joy that I wanted to share with my wife on this special day.

My next post will look at the healing balms that God brought for these paper cuts...
Posted by Duncan Forbes at 6:10 PM

Here is Julian's excellent talk on vision and values. This was such an encouraging and convicting talk, I hope it will be a blessing to you.

Posted by Duncan Forbes at 4:24 PM

How to Respond when a Bully is Exposed in Church Leadership

1. Pray for the victims.
This will be a time when victims are happy and sad. Happy to see the truth finally brought out, to see their cries finally heard, to be finally believed. But also a lot of unpleasant memories will come up, and reminders of the broken friendships when bullies trash talked and shunned them. Yes, you can still pray for the bad leader to repent, but our priority should be the downtrodden.

2. Consider where we've been complicit.
Narcissists need structures to enable them. We have enabled abusive leaders by giving them platforms, recommending them to others, and ignoring the people who've tried to warn us. If we haven't spotted they're bullies, we need to consider what's wrong with our discernment? Most likely, we haven't been trained in spotting narcissists (so see video below), and most probably, we enjoyed the way the narcissist made us feel. If we've acted as bodyguards for the bad leaders, we've been doing the devil's work. Sadly, many leaders complain of abusive leaders behind closed doors, but then publicly act friendly with such leaders, making others think they are safe people. Let's confess this in tears and humility. Let's, go to the people we avoided or bad-mouthed because a bad leader maligned them (a key strategy of abusive leaders), and confess our sin.

4. If you run a Training program, consider if it's Tainted?
These abusive problems are often in the DNA of someone's ministry. It leaks out in their preaching and resources. We saw this clearly in the USA a few years ago, and saw it more recently with ChurchToo in the SBC (where misogyny could be seen in teaching videos from the 80's). It's worth going over our training resources, and asking if they unwittingly promote abusive leadership.

5. If you're a Network leader in Evangelicalism - why aren't you protecting us?
Come on brothers, you've been so silent on issues. People have cautioned you about abusive leadership, but you remain silent. If you've promoted people, and encouraged people to give funding to such people's projects - you owe it to all of us to come clean, and explain how you allowed such people to flourish.

6. Let's stop claiming a plurality of elders protects us.
I've heard plenty of abusive leaders claim that their plurality of elders protects them from going off key (Me thinks you protest too much!). The reality is that they are manipulating their elders, bullying the vulnerable, manipulating the gullible, and outcasting the unmalleable. I'm all for plurality of elders IF your church is big enough for qualified leaders. But the key thing is QUALIFIED leaders. We have too many unqualified leaders (in terms of their character) leading a team of elders. There's godly Anglican leaders (without a plurality of elders) who aren't being abusive, whilst there's ungodly Reformed Baptists abusing people (with a complicit board of elders) and vice versa - so polity isn't our saviour here. Jesus is our saviour, he's our benchmark of what a man should be like, one who serves and protects, and who overturns tables when there's injustice in the church. Brothers and sisters, I think its time we start overturning some tables.

A Glimpse of the RTU20 Conference

This was such an encouraging day, check it out!

Posted by Duncan Forbes at 3:53 PM

Using an Electric Pressure Cooker to Cook for Church

Posted by Duncan Forbes at 4:52 PM