I thought it might be helpful to show the contents page of our Urban mission module. The first part of the course is a biblical theology of mission, starting at Genesis and going through to Revelation. Then we combine with what we learn in that biblical theology with Acts' and Paul's missionary methods. We also look at contextualisation of both church and message, and self theologising across different cultures and ethnicities. This workbook accompanies around 36 hrs of video lessons. You can find more info on the course here

Posted by Duncan Forbes at 8:05 PM

I thought it might be useful to those interested in the Urban Ministry Program to see the table of contents page of the Teaching the Bible module. This workbook accompanies around 12 hrs of teaching videos, and can only be taken after the Biblical Theology and Exegesis modules. You can find more info on the course here 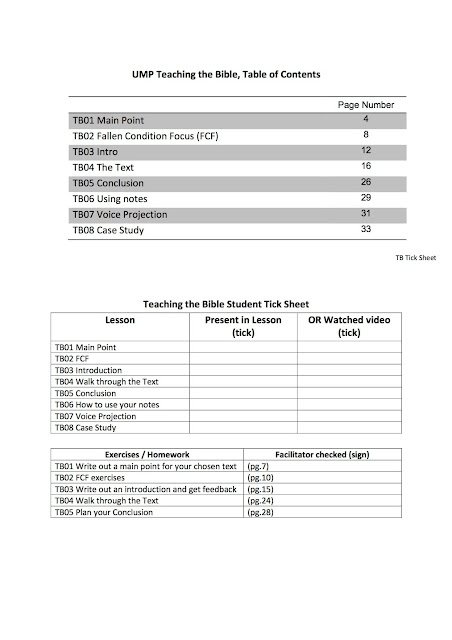 Posted by Duncan Forbes at 5:48 PM

I thought it might be useful to those interested in the Urban Ministry Program to see the table of contents page of the Exegesis module. This workbook accompanies around 36 hrs of teaching videos. You can find more info on the course here 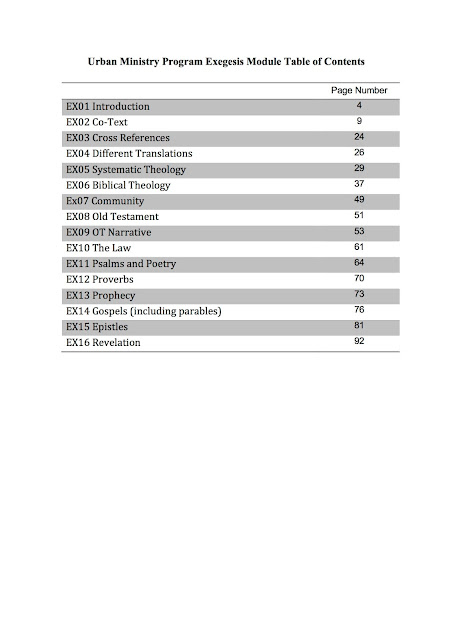 Posted by Duncan Forbes at 4:01 PM

I thought it might be useful to those interested in the Urban Ministry Program to see the table of contents page of the Biblical Theology module. This workbook accompanies around 25 hrs of teaching videos, and is the building block for later modules in Urban Mission module, Exegesis and Teaching the Bible. You can find more info on the course here 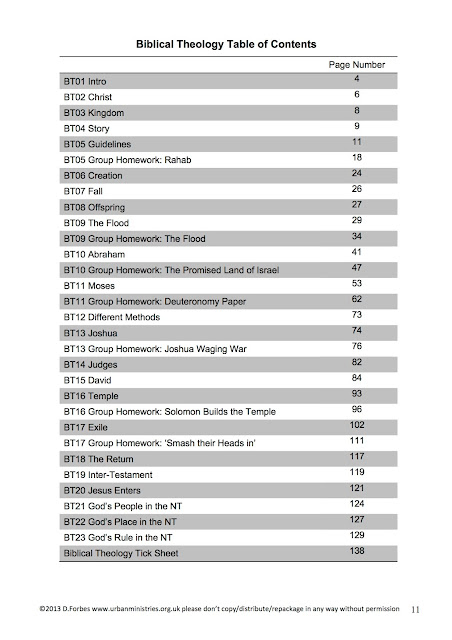 Posted by Duncan Forbes at 8:29 AM

Why is there classism and racism in the Church? And how I've changed my mind.

I used to think that within Christianity, middle class people in general had difficulty understanding the lower classes. I thought that as well as a lack of understanding, there was prejudice towards many lower class Christians. I still think these things are true to a point, but the issue is not one of class, its deeper and broader than that.

I had a conversation with a white middle class church leader where I tried to share some ways that myself and some others had felt mistreated by this brother. This is what Jesus taught us to do (Matt 18:15-19). But this leader defended himself and deflected. However, this wasn't too much a shock because I actually expect middle class church leaders to lack understanding and to mistreat me. But then I had a similar experience with a lower class leader. I tried to share how I felt mistreated, he defended himself and deflected. I went to one of his associates (another lower class leader) and he defended and deflected. I was shocked to be treated this way by brothers from the same culture as me, because I'd thought this was only how middle class people behaved.

To demonstrate that this wasn't just a shock to me, listen to one of my lower class pastor friend's response when I discretely told him what happened. Because I didn't mention names (to avoid gossip), my friend assumed I was talking about middle class people. So he responded, "You know that's how some of those [middle class] guys are...." and I interrupted him and said, "No bruv, these were our boys." "No bruv, you don't mean these were our boys do you?! No, I could see the middle class guys being like this, but not our boys!?" He was totally shocked, because like me, he assumed that its a middle class tendency to be self righteous, defensive, and deflective.

The sad truth had already dawned on me, and now it was dawning on my friend: Failing to listen to the wounded, not bothering to understand, defending one's own position, deflecting and blame shifting, are not reserved for the middle classes, they are part of the human condition.

Of course, there were ways that I had already understood this, Adam and Eve after the fall demonstrate the human condition of blame shifting. I'd taught extensively on how we do this, and how we have a lot of victim mentality in the lower classes. But, I'd thought that when middle class people fail to understand our sometimes painful predicament, and when they fail to recognise how they are somethings hurting us - that this was because of their class - as if this was a class issue.

I've now had to rethink things a bit, and here's some of my tentative conclusions:

What's the solution?
In the past, I would have thought part of the solution was that we needed to better inform people. To invite middle class church leaders to the hood, to show them and inform them of the struggles we face. To gently explain some of the examples of prejudice we face in the Church. But now I think the solution is different - its the gospel.

We need more of the gospel. We need to be more cross-centered. We need to apply the doctrine of justification by faith more. We need more identity in Christ, and as God's adopted children. The more I am living out of these truths, the more happy I am in the fact that whilst a sinner, I'm justified. I'm righteous in God's sight, and he looks at me as his son with whom he's well pleased. From this position, I'm more willing to hear a brother tell me he thinks I've wronged him. I know its possible because I know I'm a sinner. At the same time, I'm not going to be so defensive because I'm already secure in my identity in Christ. I'm not afraid of being caught out, because I know Jesus has paid for my sin, and confessing it won't mess up my standing with God.

The problem isn't going to get better without us first being more gospel-centered. We can try to educate people about the plight of the lower classes in the UK, or of African-American's in the USA, but if the people we're talking too aren't saturated in the Gospel, they will defend and deflect.

If we're not more gospel centred, then I can't even come to you and say that you wronged me the other day when you gossiped about me. And if I can't come and do that, then how can I possibly come and say that your whole church group is prejudice or racist?

I'm not saying that we shouldn't try to inform and educate people. I think we should tackle some of the false narratives said about lower classes and certain ethnicities. BUT I'm saying that this truth telling needs to be preceded with the Church being more gospel centred, so that it can listen. Of course, that starts with me being more gospel-centred myself.

So what would repentance look like for us?
- Firstly, I think repenting of pride, the pride that we think we're above the people who try to correct us.
- Secondly, of unbelief - not really believing in justification by faith and so instead trying to justify ourselves, being self righteous.
- Thirdly, repenting of listening to the lies. Lies about how we're better than others. Lies about how others are in the wrong, and there's no way we've wronged them.
- Fourthly, repenting of not doing conflict resolution even though Jesus made it pretty simple for us (Matt 18:15-19).

Posted by Duncan Forbes at 6:16 PM

How I Cope with Chronic Pain

From the age of 4, I've been dealing with chronic pain from Hypermobility Syndrome. Over the years its got worse, and these days I'm in constant agonising pain 24/7. Rose Marie Miller said I should tell others about my experience in case it helps others, so here's how I cope with chronic pain. They go up in ascending order of effectiveness.

1. Painkillers, ice packs, hot baths, swimming in the Mediterranean and massages.
These things all help somewhat, but are just temporary. I try to avoid painkillers as much as possible, not wanting to be addicted, or to mess up my stomach. Ice packs and hot baths are easy to do with no side effects. Massages temporarily ease the pain, but I can't ask my wife to massage me all day! I've found swimming in the Spanish coast to be really helpful. The warm water, along with the salt content helps my joints to be in the right position instead of hanging (a symptom of Hyper-mobility Syndrome).

2. Watching clever movies.
If I can find a clever movie, it helps to distract me from the pain. If its not clever, it won't help. Unfortunately the pain is usually too great to read, so interesting books are out for me. I have to save reading for when my pain levels are not too high.

3. Cooking.
When I cook, it tends to distract me from pain. It's also a way I can focus on blessing others. Pain can easily make me focus on myself too much and become selfish. Cooking helps me to think more about how to bless others.

4. Making music.
When I go into the studio and start making music, I forget my pain. If I'm in too much pain to get to the studio, I have a DJ set up that swings over my bed so that I can DJ in bed.

5. Singing songs to God.
Singing songs where the lyrics focus on how amazing God is, really help me to take my focus off my pain and on to God. I'll either do this by my self or with my family. I have a bunch of songs at the ready so that its easy to play even when I'm in excruciating pain.

6. Praying to God.
Sometimes when I'm in lots of pain I cry out to God to help me. Sometimes I pray that he'd take me to heaven early, other times that he'd give me the strength to take the pain. Sometimes as I pray, I feel an amazing sense of God's presence. There's been a couple of times when this has been such an amazing experience that I've ended up thanking God for the pain because of the joy it led to.
Posted by Duncan Forbes at 8:52 PM